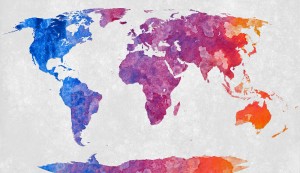 If you would like to find example infographics, Statista — even the open, non-licensed-version of Statista — has many here.   There’s lots to talk about with these images!  And, who knows??!!  Your students may even want to use the data on these pages for their research projects.

As an example, see The Unrelenting March of Diabetes below.  I was surprised to see Russia included in the European Region.   Note also the interesting use of color and size in the chart below.    Think of the size of the circles in relation to the geographic area they represent.   Now look at the percentage in the circles.   You can barely see the map of the Eastern Mediterranean Region underneath a 13.7% circle.  The percentage listed does not really match how much space it takes up on the maps of the different regions — but we would expect that there would be some sort of relationship there.  The relational size is actually in “mapping” the red circles and orange circles to each other.  If they had made the circles any smaller in order to show the geographic relationships, we probably couldn’t read what was in the circles!

You will find more statistics at Statista

And, please know, there are a lot of amazing infographics at Statista — Some really good ones!  Check it out! 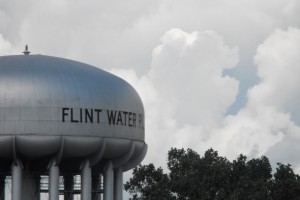 This week I worked with U-M Library’s Emergent Research Committee to bring Marty Kaufman to the library.  He talked about the data gathering that he’s been doing to help map the locations of lead pipes in Flint’s water system.  For more on his talk see Patricia Anderson’s great Storified version  or the MLive coverage of his presentation.

Whenever I mention the Flint Water Crisis to students they become really engaged.  My colleagues and I are using the information about this issue to discuss things like the nature of authority in informational sources (“Authority is Constructed and Contextual” for my academic librarian peeps), and students seem to really catch on.  I talked with my advanced research students yesterday about the crisis, and I didn’t have to remind them in any way about what’s going on.  And just the other day, my 24 year old nephew mentioned that he had stayed up until midnight to watch the Flint Water Crisis Congressional hearings.  He says that sometimes watching election coverage seems like he’s watching some kind of movie.  But what’s happening in Flint seems “real.”

In his presentation, Marty talked about how he and his team had to go through thousands of penciled index cards (“big” data) to determine where lead pipes are located.  He said that it’s difficult to get a clear sense of where things are because of unclear index cards (data) — yet they have to draw some kinds of conclusions.  Based on the data that they’ve gathered, the team is going to have to use predictive models to determine the likelihood of where lead pipes might be in places without clear index cards.

When asked what the general public should do, Marty made a clear case for all of us to become data collectors — He told us to look for lead in the water systems, paint, and toys within our own homes (a place where lead might be impacting all of us the most!) and record it accurately and PERMANENTLY (don’t use pencil!).  Somehow, if we can all gather this kind of data and pool our information, we can better address the serious issue of how lead exposure can impact our lives.

One of the most striking images in Marty’s presentation is the image of  undergraduates working in his GIS lab, many of them Flint-area residents.  Marty says that he had to kick the students out at the end of the day because they were so invested in their work.  Understanding that data comes from “somewhere” and that having good data can make a real impact on your life is a huge motivator.   Data and data literacy matter.

“Andrew Hacker, a professor of both mathematics and political science at Queens University has a new book out, The Math Myth: And Other STEM Delusions, which makes the case that the inclusion of algebra and calculus in high school curriculum discourages students from learning mathematics, and displaces much more practical mathematical instruction about statistical and risk literacy, which he calls “Statistics for Citizenship.””

Andrew Hacker has an intriguing idea that the high school math curriculum needs to be radically re-examined.   And, no … He’s not talking about Common Core!  What if we didn’t teach Algebra II and Calculus in high school and instead taught, “Statistics for Citizenship?”  Would there be less math anxiety for students?  Would lessening the requirements for some professional training , like EMT training, open professional doors and expand the workforce?  Would students be more statistically literate and better citizens?  Would we finally be able to answer the age-old, high school question, “When am I going to use calculus in real life?”  (And just to be clear … I LOVED math in high school and took every math class that I could!).

Hacker is advocating that teaching statistical literacy explicitly in a classroom devoted to these concepts is better than dedicating part of the day to teaching advanced math.  Statistical literacy is one of the main concepts of the grant this year.  Overall, I’ve really struggled with looking at how teaching data literacy can be holistically integrated into the curriculum.  I want our work to be useful and successful so implementing it is always on my mind

School librarians present an interesting model for holistic integration of any curricular change.  While some teachers think that librarians are only working with English or Social Studies teachers, school librarians can work with any teacher — Some work with Health teachers as students create posters representing good health practices.  Others work with science fair participants to create solid ideas around the practical application of scientific concepts.  The list goes on and on.  As one of our Library Development Officers used to say to potential donors, “The Library is for Everybody.”  Having a separate statistical literacy class flies in the face of having students see how any information literacy concept is integral to the rest of their work as they encounter the practical application of these ideas throughout their day.

Dedicating part of the day to statistical literacy is intriguing to me.  Having a class like this occupy some of the day’s “real estate” would send a signal that statistics for citizenship is important for our children … Yet … I always wonder about the holistic aspect of separating out overriding conceptual ideas into their own place in the curriculum.  I struggle with this separation in teaching information literacy too — Why can’t info lit be more grounded into the rest of the curriculum, especially at the college level?  I’m not sure that I know the answers to these questions.  Maybe we could find a thematic approach — Students could have a separate class AND apply statistical literacy ideas in science, English, government, and other classes.  Is that asking too much?