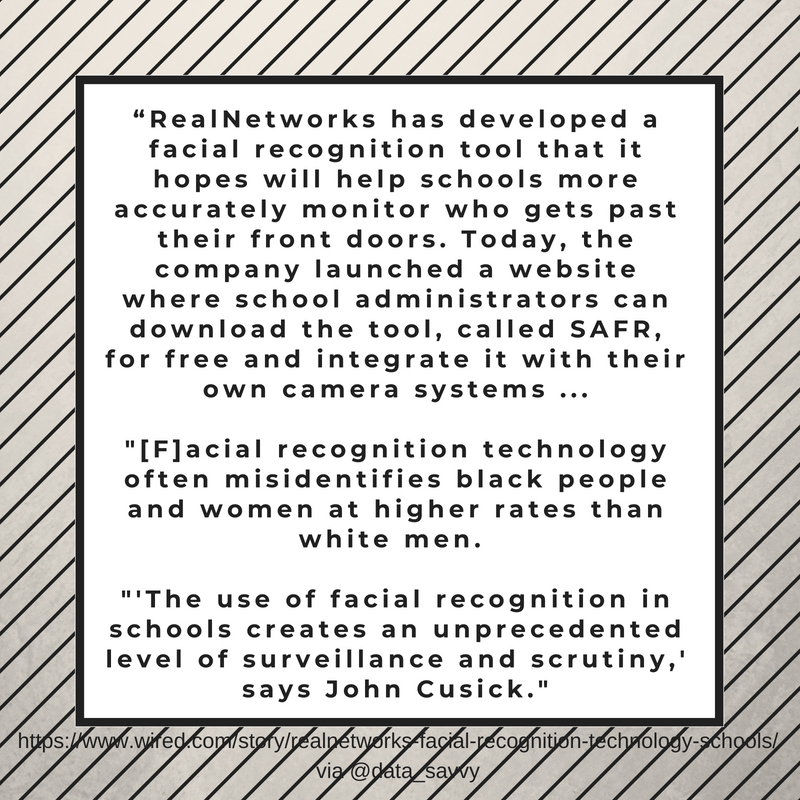 Wired has a fascinating article out about a newly-released and free facial recognition tool that, coupled with existing video monitoring, claims to keep schools safer. From the article by Issie Lapowski:

“RealNetworks has developed a facial recognition tool that it hopes will help schools more accurately monitor who gets past their front doors. Today, the company launched a website where school administrators can download the tool, called SAFR, for free and integrate it with their own camera systems …

“The use of facial recognition in schools creates an unprecedented level of surveillance and scrutiny,” says John Cusick, a fellow at the Legal Defense Fund. “It can exacerbate racial disparities in terms of how schools are enforcing disciplinary codes and monitoring their students.”

Glaser … is all too aware of the risks of facial recognition technology being used improperly. That’s one reason, in fact, why he decided to release SAFR to schools first …

“I personally agree you can overdo school surveillance. But I also agree that, in a country where there have been so many tragic incidents in schools, technology that makes it easier to keep schools safer is fundamentally a good thing” …

Glaser approached the administrators at his children’s school . . . which had just installed a gate and camera system, and asked if they might try using SAFR to monitor parents, teachers, and other visitors who come into the school. The school would ask adults, not kids, to register their faces with the SAFR system. After they registered, they’d be able to enter the school by smiling at a camera at the front gate. (Smiling tells the software that it’s looking at a live person and not, for instance, a photograph). If the system recognizes the person, the gates automatically unlock. If not, they can enter the old-fashioned way by ringing the receptionist.

According to head of school Paula Smith, the feedback from parents was positive, though only about half of them opted in to register their faces with the system … It decided deliberately not to allow their students, who are all younger than 11, to participate, for instance …

For now, RealNetworks doesn’t require schools to adhere to any specific terms about how they use the technology. The brief approval process requires only that they prove to RealNetworks that they are, in fact, a school. After that, the schools can implement the software on their own. There are no guidelines about how long the facial data gets stored, how it’s used, or whether people need to opt in to be tracked …

There are also questions about the accuracy of facial recognition technology, writ large. SAFR boasts a 99.8 percent overall accuracy rating, based on a test, created by the University of Massachusetts, that vets facial recognition systems. But Glaser says the company hasn’t tested whether the tool is as good at recognizing black and brown faces as it is at recognizing white ones. RealNetworks deliberately opted not to have the software proactively predict ethnicity, the way it predicts age and gender, for fear of it being used for racial profiling. Still, testing the tool’s accuracy among different demographics is key. Research has shown that many top facial recognition tools are particularly bad at recognizing black women. Glaser notes, however, that the algorithm was trained using photos from countries around the world and that the team has yet to detect any such “glitches.” Still, the fact that SAFR is hitting the market with so many questions still to be ironed out is one reason why experts say the government needs to step in to regulate the use cases and efficacy of these tools.

“This technology needs to be studied, and any regulation that’s being considered needs to factor in people who have been directly impacted: students and parents,” Cusick says …

The question is whether it will do any good. This sort of technology, Levinson-Waldman points out, wouldn’t have stopped the many school shootings that have … been perpetrated by students who had every right to be inside the classrooms they shot up …

Glaser, for one, welcomes federal oversight of this space. He says it’s precisely because of his views on privacy that he wants to be part of what is bound to be a long conversation about the ethical deployment of facial recognition … “If the only people who are providing facial recognition are people who don’t give a shit about privacy, that’s bad.”

Some questions to think about or discuss with colleagues or students:

As we ramp up for tomorrow’s conference, here’s a video from our co-host ICPSR on metadata — all the descriptive information that accompanies a spreadsheet when you download it. Check it out!

Hop over to our conference web page to register. It’s free, and there are some amazing ideas and presenters awaiting you! 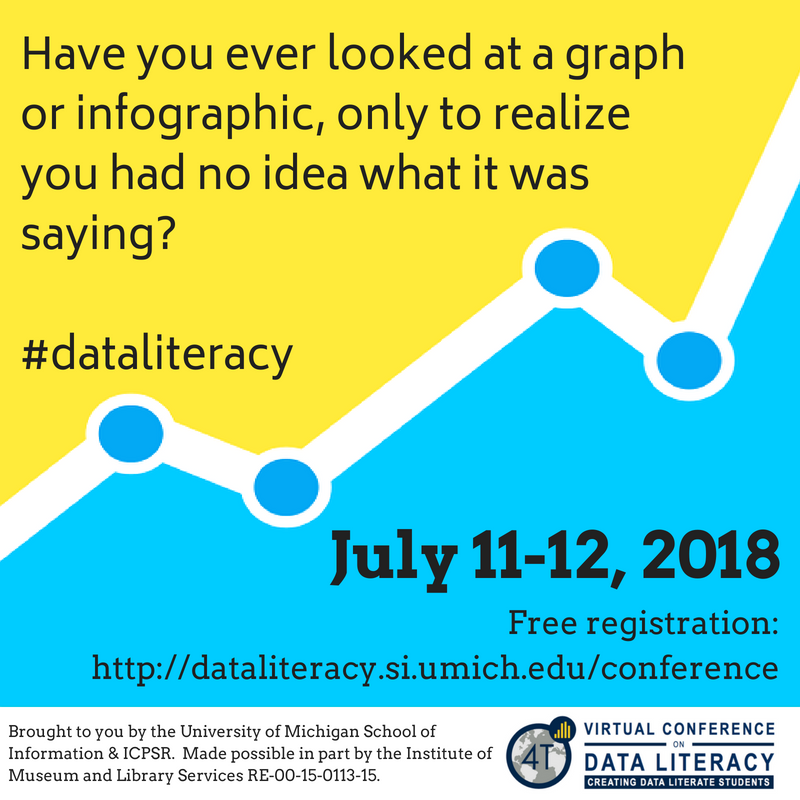 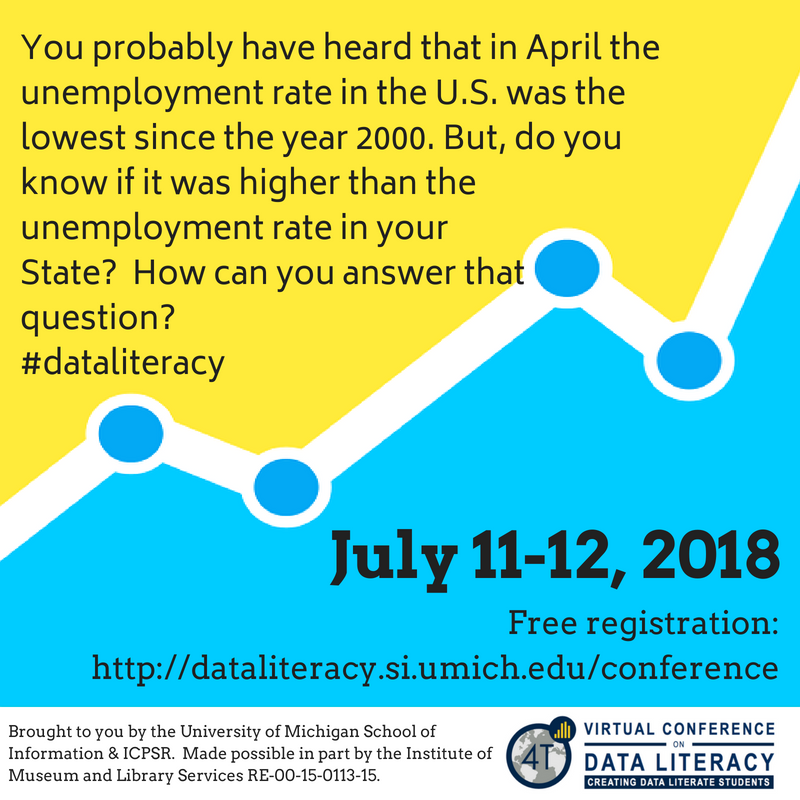 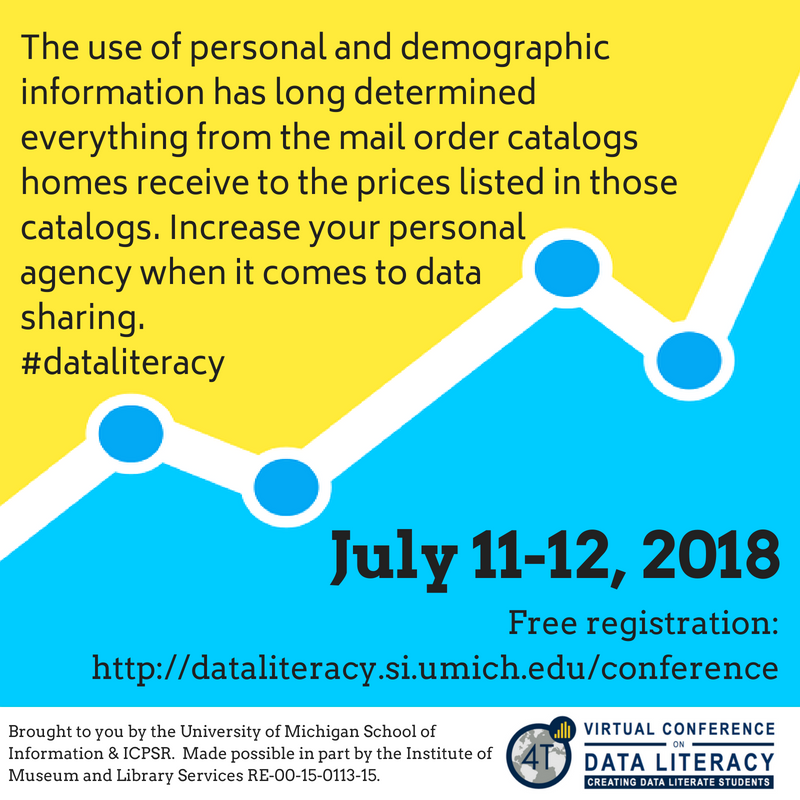 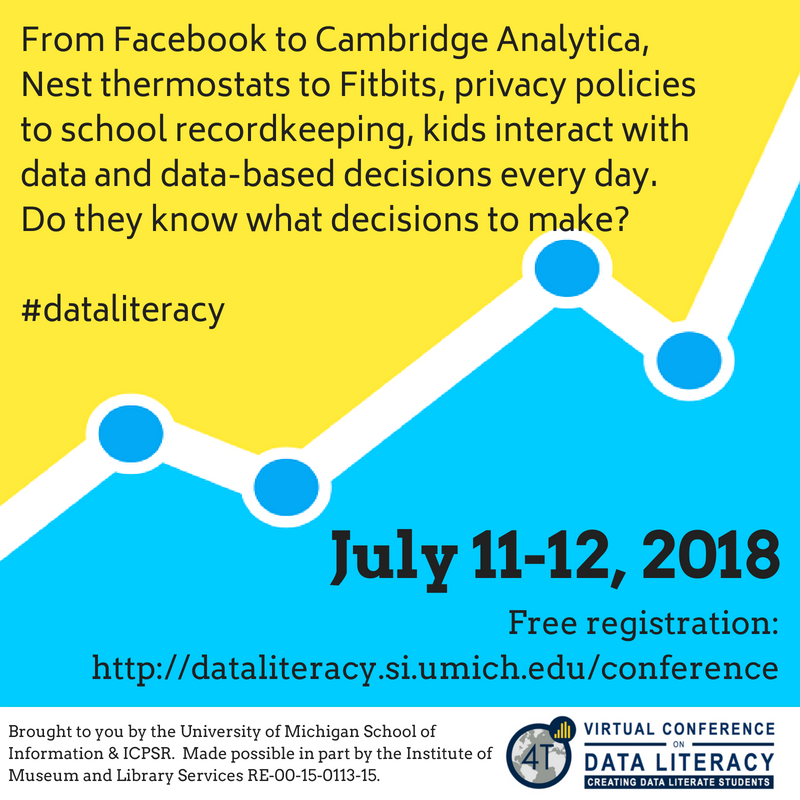 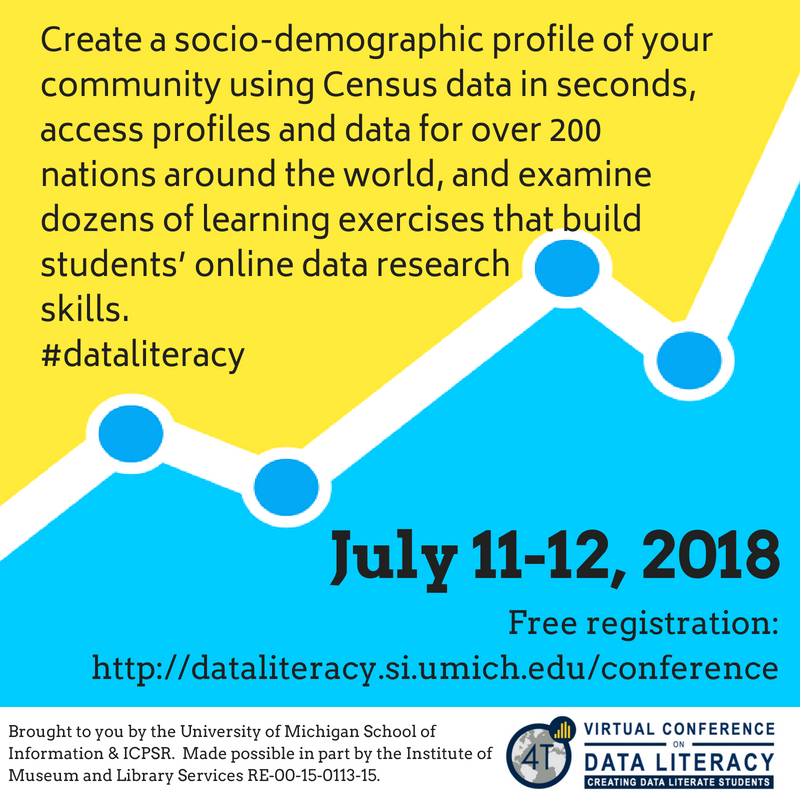 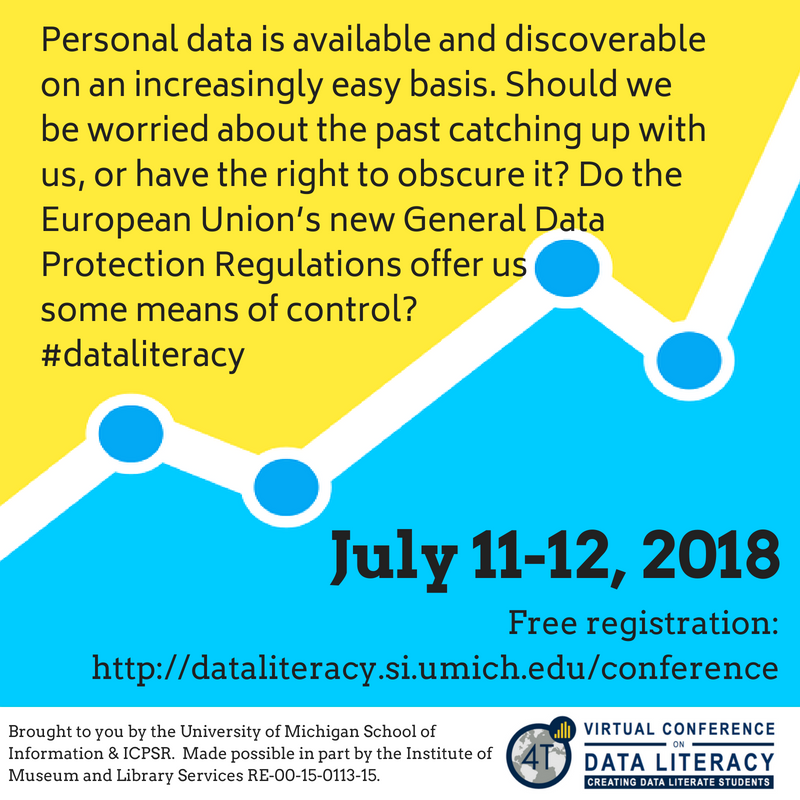 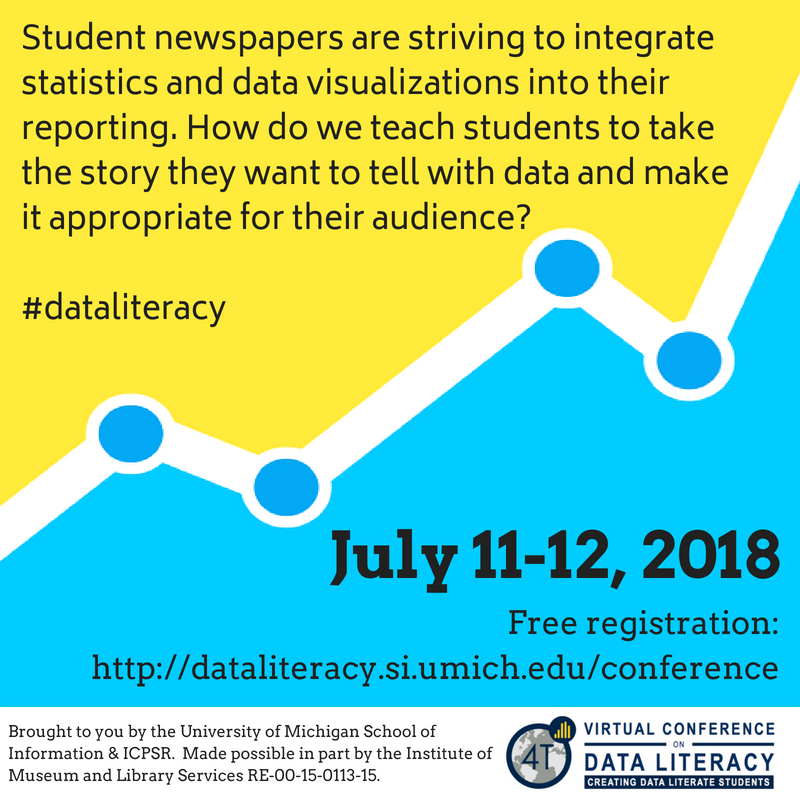 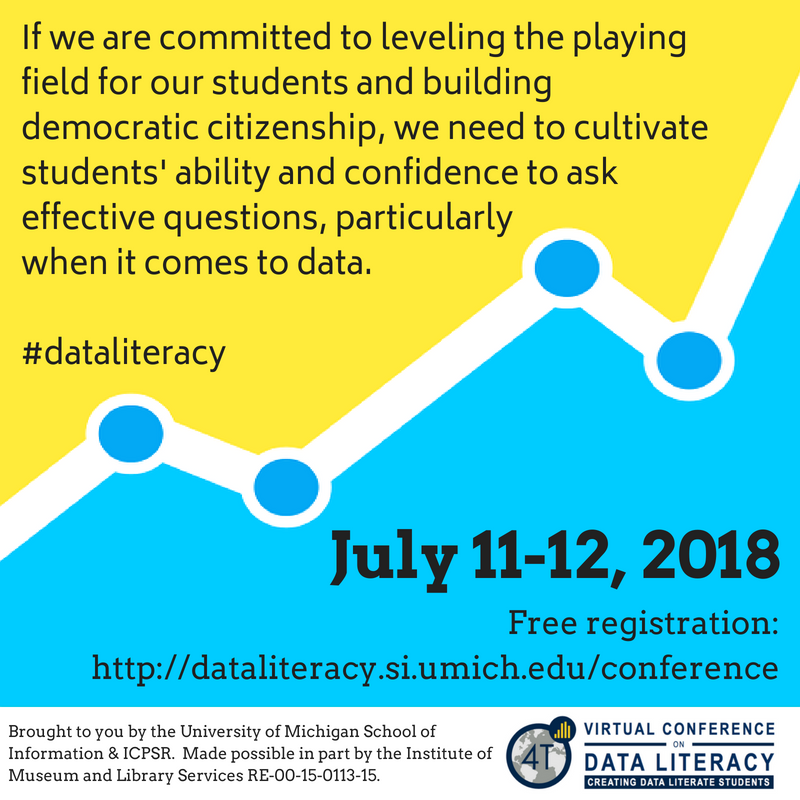 A while back, we showed you retired Microsoft CEO Steve Ballmer’s USAFacts site, which he built with a team to help Americans discover how the U.S. budget is being spent.

Back in May, team member Connie Williams shared the beta site for USASpending.gov (slowly transferring over to the “actual” site over the summer), which is a federally-mandated site for viewing government data.

Why not take both for a spin and think about how a compare-and-contrast task like this could be beneficial to your students?